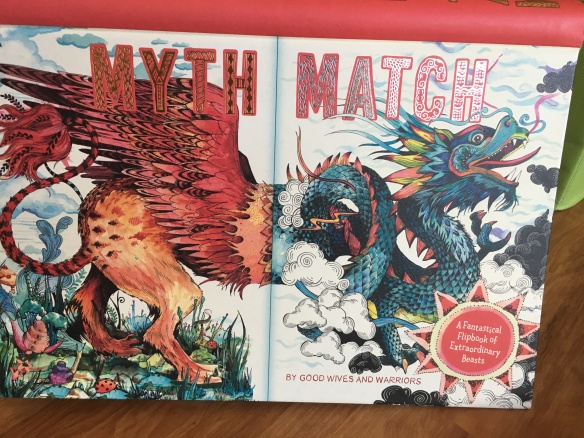 My mother wanted children for a number of reasons, but one of the reasons that stuck with me was that she wanted someone with whom to share children’s books.  She hit jackpot with her firstborn (my brother didn’t really like books or literature of any kind until college), and I was reading before kindergarten.  Every year at Christmas I got a stack of children’s literature; and the public library was always my favorite place to visit. My mother got me started with the greats:

There were others, sure.  And then on my father’s side there was the slapstick of childhood in Warner Brother’s cartoons (he preferred them to Disney, but Disney was okay by him too if the film had actors he liked, such as Phil Harris or Jimmy Durante).

I inherited all of this, in addition to a pretty deep attachment to LEGOs, Harry Potter, and the legends of comic books and graphic novels.  I like Pixar movies.  If I could still go to story hour and not make the room uncomfortable, I would.  I love coloring books.

There are two worlds of whirling dervish right now on social media: Marie Kondo’s broadcasts of decluttering lives, and Bill Maher proclaiming that comics are something everyone should have outgrown at the age of 17 and a half.  Marie believes in ridding our lives of anything that doesn’t “spark joy,” including–gasp–books, if that’s the case. Maher doesn’t care if the comic books spark joy, get rid of them anyway and grow up. Read the adult stuff, he insists, like Dickens or Melville, etc.

I have to admit a couple of things here.  First, I haven’t seen the Marie Kondo episodes on Netflix; I’m a neat freak already and I imagine Kondo would just bore me.  I do watch Maher’s show Real Time, but I watch it more for the same reason that I occasionally pick up a copy of O Magazine; I like the contributors more than the host.  I could do without Bill (or Oprah), but I’m pretty impassioned about his show; without it I wouldn’t be aware of some of the stuff that I think it’s important that I should be aware of.  Some of that awareness is despicable, but some of it isn’t.  Do I agree with Maher on his take on comic books? Nope. Do I agree with all of his contributors? Nope. Do I cringe when he puts some of these contributors on? Oh yes.

But whether it’s Kondo or Maher or someone else, I think the lighting of the hair on fire based on disagreement could be discarded unless it could be presented as discourse.  If I ever get around to watching Kondo for fun some rainy afternoon, then I’m not planning on losing my mind when she says ditch some books; that’s just the piece of the pie I don’t need to take, and then I can drop and move on.  When Bill launched into this anti-comic tirade last Friday night, I wasn’t happy (it seemed like an over-simplification, but so does the “spark joy” argument and all of the arguments against Kondo and Maher), but that’s just the piece I don’t take with me.

When did the internet turn into self-help?  There’s nothing wrong with self-help, either, but goodness, did the folks watching any self-proclaimed subject matter expert really think they should have that complete authority?

Maybe we learn something from everything, albeit not always the intended lesson of the teacher.  Kondo’s whirlwind taught me that, and she meant to teach us all how to be neater.  Maher’s whirlwind is reinforcing something in my learning; I have often thought my failures have hatched in not following the well-intentioned and/or unasked advice of others, when I should consider the various contributors.  Maher’s ranting about comics during his editorial bits teach me how important all voices are, including my own.

I don’t need to yell at Kondo to “Leave my books alone!” or yell at Maher to “Leave my children’s literature alone!” I just need to shrug and read my books, be them Melville (which I love) or Winnie the Pooh (which I still love), or watch Ant-Man (which is still the laugh I need).  Keep talking, Kondo and Maher.  Someone’s nodding in agreement somewhere, and you’re the validation they need…but I’m good on my own, finding validation elsewhere.